“Of concern” is a collection of short stories based on the Rotterdam-West residents. I conducted a series of personal conversations in the neighbourhood with focus on: belonging, shared communities, and practices, and inner relationships built between residents. The project fosters diversity and multiplicity in this part of the city and tries to open a dialog about coexisting cultures, and intimate voices which emerge.

Artists create opportunities for the community – individuals, businesses, social service groups – to come together through different cultural experiences and informally build stronger bonds with one other, they make the neighborhoods livelier. In return, the neighbourhoods give the arts diversity.” – Jan Cohen-Cruz

“ It was the mentality of that time: ‘old’ was not good enough.” 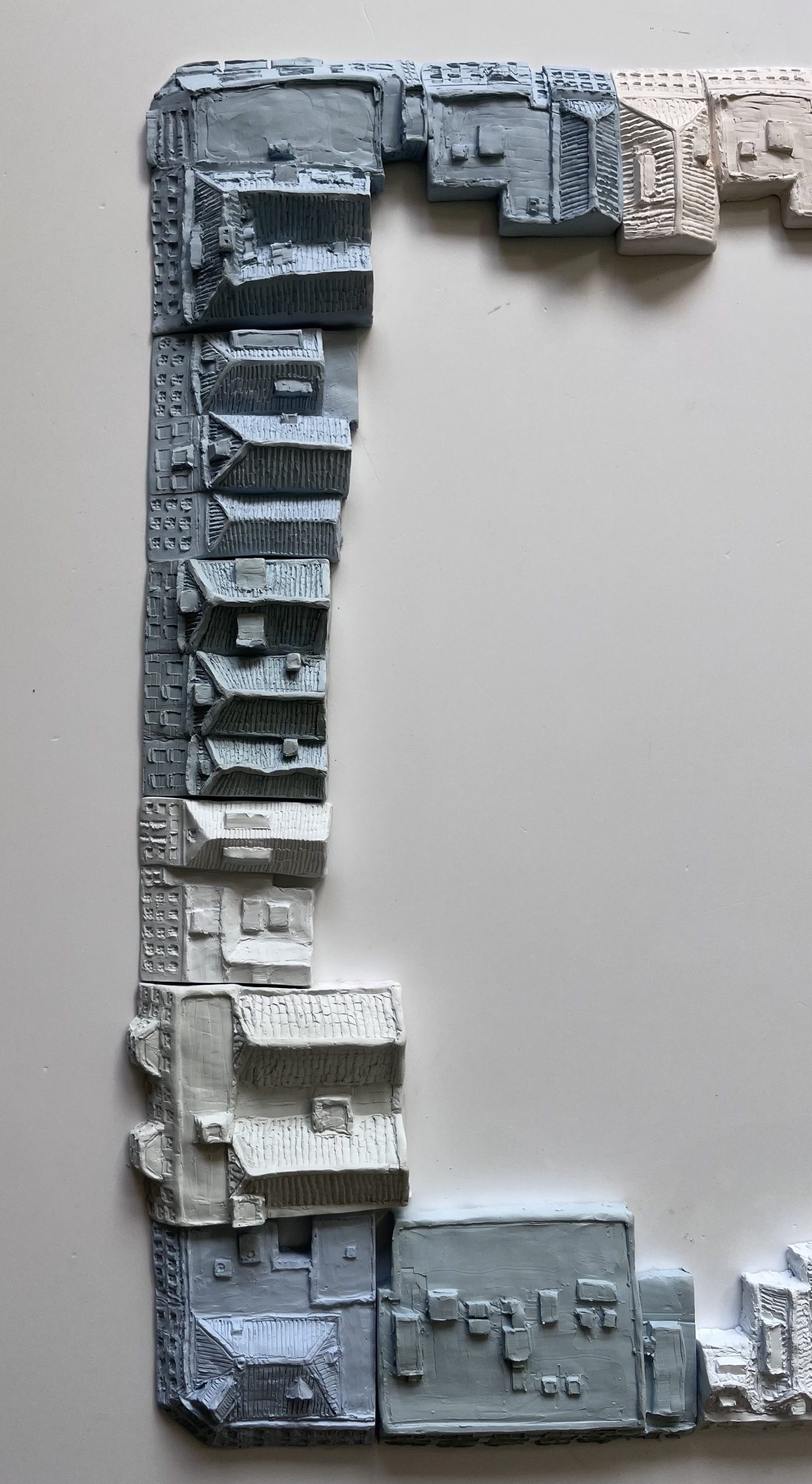 Back in 1984 Rotterdam-West was not a good neighborhood. There were often girls, prostitutes, sitting on my doorstep, I would often give them coffee and bread, and if I had enough time, I would let them take a shower at my house.

At this time, I was living with three, sometimes even four other divorced men. We named the rooms by their color: the black room, the green room, the blue room – and there was the master room which was slightly bigger. With time each resident would upgrade to another room, according to their period of stay and their needs. Our house was facing a house owned by three Turkish brothers. One day I was offered to buy the house from them, which I did. Just after I had moved in, I received a letter from the city hall saying that they were going to demolish an entire row of ten houses on that street. Renewal was popular in the 1980s; more buildings were demolished in that period than during the Second World War. Even the most beautiful Art Deco houses had to go. It was the mentality of that time: ‘old’ was not good enough.

I gathered a group of people to challenge the municipality’s decision. It took us about five years, but in the end we won the case. We set up a foundation, with which we could buy back, renovate and sell the houses one by one. Fortunately, I knew the notary who helped us organize it, and there was a bank, which lent us the money. That’s why I still live here. I’ve been very lucky.

Now, I have the keys to the houses of five or six of my neighbors, and all of them have my house keys as well. When one of us goes on vacation, we look after each other’s pets and plants. Sometimes it feels like I’m living in a small village. It’s quiet here and there; only a few places in Rotterdam are as green as this part of Middelland.

I am part of a group, which consists of ten women, all close friends and neighbors. We gather once per month in altın günü, also known as the Gold Day. These are not just ordinary get- togethers where traditional homemade food is served (kisir, pogaca and dolma are a must on the table). At these gatherings, we also give each other gold, and it is one of the women’s turn – the host – who collects all the gold. She can either keep it in her savings or use it for her own needs. For example, the gold could serve for various purposes such as pending debt; covering the costs of a wedding; the first deposit of a house or expensive health treatment. 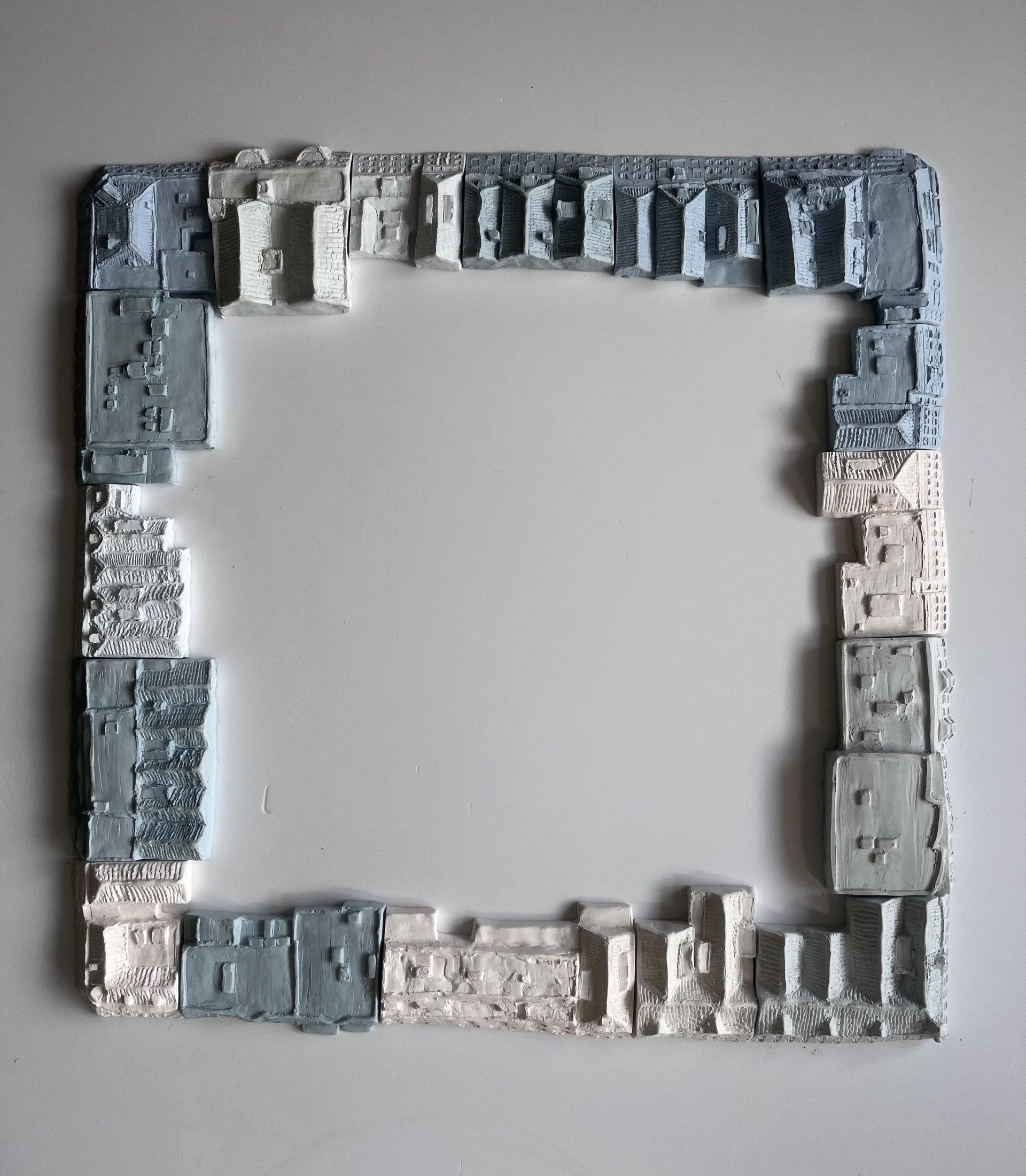 This collective practice of sharing resources is securing financial means in times of needs. In a way a circle economy is created between us, built on a level of trust, community support and care.  Instead of having to take a loan from a bank, through this tradition of collecting gold –one might receive the whole amount and pay back in installments.

In different cultures gold is usually given to a woman on a special occasion, like a marriage or when there is a newborn member in the family. Gold is something very tangible and precious, a material of which the value and exchange rate remains high and stable in the long run. Nowadays these monthly social gatherings are important to us as a way to not only keep savings but also to keep our culture alive.

“I saw the shining lights, huge ships and cranes, it looked like New York City from distance, I always wanted to work at the port”

I was only 18 years old when I first came to the Netherlands. My first job was at a tulips farm in Noordwijk.My work consisted of cutting and picking tulips in the field and placing the root of the tulip so called “onion” on a mechanical belt. One day I had an accident: I cut my finger badly, it developed a severe infection. Back in that, time I only spoke Polish, and I didn’t have any health insurance. I went to the hospital to seek help twice, first a General Practitioner performed a simple procedure of cutting, cleaning and putting a bandage to the open wound. In the following days, it was getting worse and worse, but I still had to work in the field. I went to a hospital again, where the doctors said that it was very serious and they must amputate my finger. At first, I couldn’t believe it, I thought to myself that I would rather go to Poland than allow that to happen. Then suddenly I heard someone speak Polish in the corridor, and it was thanks to that doctor that I had the right treatment.

In the next year, I changed jobs sixteen times through different recruiting agencies and lived in several houses, mainly with other Polish people. One of the residency buildings was even a former nightclub in the Middelland area, which was eventually turned into a hotel. Sometimes I shared a room with two or three other people. Time passed and I learned new trades and found better work.

The other day, when I was driving through Europort by night, watching the lights shining, the huge ships and cranes; it looked like New York City from a distance. I always wanted to work at the port, it was my dream job, and now, I am working here as a maintenance technician, I maintain and assist the ships upon arrival and out of the docks at their departure.

“A certain warm feeling that
makes me want to come back
again.”

The shop on Vierambachtstraat is a cabinet of curiosity or a place to discover. A man of Moroccan descent sells all kinds of goods; from nuts and dried fruits, seeds and kernels, oil, honey and the best cinnamon I’ve ever tasted. Also, one can find an entirely different set of peculiar items such as bicycle parts, nuts and bolts in all shapes and sizes and household items: rice cookers, dustpans and brushes, brightly colored plastic tablecloths on rolls. Whenever I enter his shop, he calls me ‘zus’, sister in a gracious manner. ‘Will that be all, sister?; or Okay, sister.’ One day I told him that I like coming to his shop because he calls me this way and then he friendly replied: ‘I call you this way out of respect. One would never hurt his or her own sister.’

I love this special feeling of comfort with a person who I don’t really know, just because he calls me ‘sister’. How this one simple word ‘sister’ – instantly creates a sense of closeness and belonging, and makes me feel less alone in this city.

“It takes a village to raise a child.”

When I was four, a new residential building was built in Middelland. Families of different origins, mainly from Suriname and Cape Verde, all came to live here.

I grew up together with their children and our parents raised us, as one big family. They would take us to school, celebrate our birthdays and organize games on the street. I grew up with the feeling that we can achieve everything within our small community, our little ‘neighborhood club’ as we call it. We all learn from each other and our extended family. It really matters where you grow up: if not all these people had come to live here, my childhood, as a daughter of Surinamese parents in Rotterdam West, would have been completely different. There would have been less common ground with the people around us. My parents always encouraged me to follow my own path, but they had little knowledge of the Dutch school system. It was my older brother who put a lot of time and energy to guide me through. He would quiz me for exams and take me to places, activities. It’s partly thanks to him that I discovered my creative side and choose to study arts. I was lucky.

Many children with my background have to work harder for the same opportunities. With my knowledge and experience of being a second generation, I want to make it easier for the next generation – the one growing up now. I want to be their older sister or aunt in order to help them to develop their talents and dreams. Middelland is a beautiful area, a place where you can achieve everything you want, and that applies to everyone! 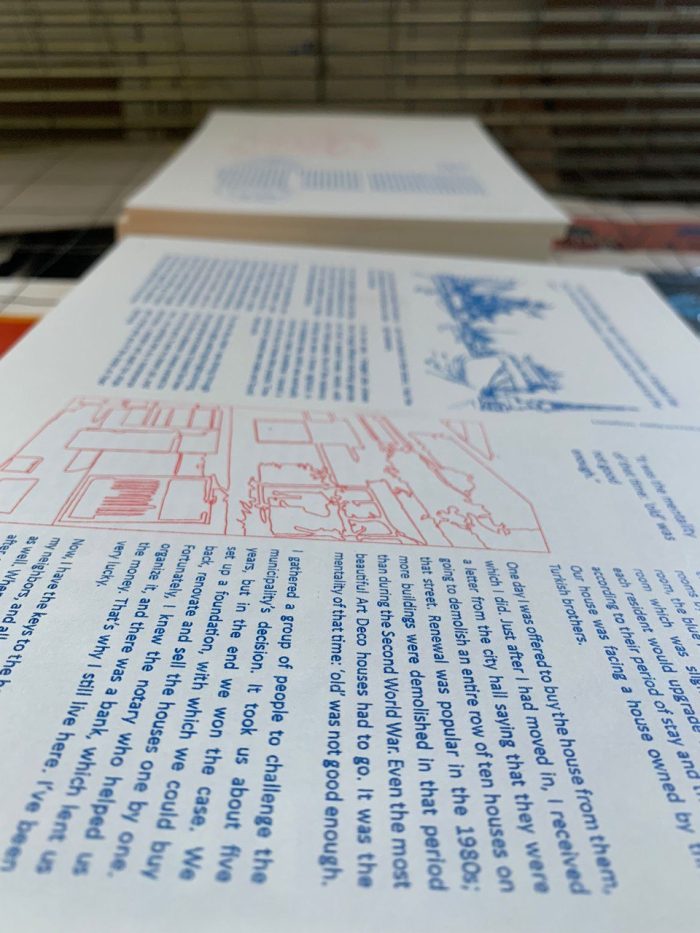 This project was Riso-printed in an edition of 150, June 2022.
Many thanks to all participants who agreed to share their stories and also for guidance of Michaela Lakova, Nienke Terpsma, and the help of Colin Dassen with the production of the porcelain houses and the resin table.
Editing by Laura Akana
Riso print by Michael van Kekem
Public artwork, porcelain, resin table handcrafted 17 West Rotterdam houses from the street of the stories collected. Table is used daily in Urban Espresso Bar.
This project was realized with the generous support of Droom and Daad.